Written and directed by Sir Kenneth Branagh, Belfast is a glimpse into Branagh’s childhood, growing up during the troubles there in the late 1960s. Branagh’s proxy is Buddy (Jude Hill), who, while heading home because it’s teatime, is stopped by an outbreak of violence. With his Pa (Jamie Dornan) away in England, working as a carpenter, Ma (Caitriona Balfe) is the mainstay in the household. Throughout the film, we see the complicated relationship between Ma and Pa, navigating life in volatile times. Of course, you know how the story ends since Branagh is a successful actor.

Most of the movie was in black and white. The only portions in colour were in the beginning, with shots of modern Belfast and when Buddy watches plays, movies, or television. It effectively uses this colour, highlighting Buddy’s interest and future career in the arts. There was also a Thor Easter egg, which was amusing.

The complaints about the film not having a plot are valid as it does lack a definitive plot. It rollicks around and is more about the experience and what’s important to Branagh, his hometown, family, and childhood experiences. I hate saying it’s a love letter to Belfast because it sounds lame, but it’s true.

While the film was shorter than most recently, there was ample character development. The two standouts for me were Granny and Pop. Dench and Hinds brought dimension to their characters and had good chemistry. I haven’t seen Balfe in much, but I didn’t really dig her performance, and, unlike Hinds and Dench, there was no chemistry between Balfe and Dornan. Though, that may have been intentional since Ma and Pa were rarely together. Hill’s performance was impressive for his age, as Buddy. It’ll be interesting to see how he evolves as an actor.

The movie release in the USA in November is a dead giveaway that the studio wants it to be in the running during awards season. This film proves that a director can tell a rich story, with proper character development in less than two hours. While the plot was thin, the film was joyous and full of heart.

Belfast will be released in the UK later this month

REVIEW: The Devil to Pay 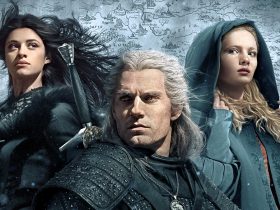