HBO Max’s The Staircase dramatizes the events of the strange Kathleen Peterson murder. After Kathy (Toni Collette) mysteriously falls and dies at the bottom of the staircase in her home, law enforcement questions whether it was an accident or murder and Kathleen’s husband, Michael (Colin Firth), becomes the only suspect before being charged with murder. While Michael insists that he is innocent, his private life is brought into the spotlight, making him look all the more guilty. During his case, he agrees to be the subject of a documentary to prove his innocence. The documentary crew is then pulled into this strange saga as they film in real-time.

What a slog this was. The series is about three to four episodes too long and the pacing was so uneven that it was hard to keep watching. Since the story was agonizingly drawn out, I became so bored that I began reading while it was on. This seems to be a general problem with HBO Max series. They release the episodes weekly, but there’s nothing that makes you want to tune in every week and I was not counting down to the next episode. In fact, I plumb forgot about it.

For me, two things kept me mildly interested. The main reason I decided to finish the series was for Colin Firth. I’ve watched the documentary series twice, and Firth’s accent and mannerisms were so spot-on that it was scary. Michael Peterson himself is not likeable by any stretch of the imagination and is a raging narcissist. Firth made him even more repulsive, which I didn’t think was possible.

The secondary reason I kept watching was for the murder scenes. Yes, it sounds very creepy, but here’s why they were so good. As new theories of Kathleen’s death were introduced throughout the series, each scenario was acted out. Toni Collette did a fantastic job with these tragic and violent scenes. It was super disturbing, but those scenes were the strongest in the entire series.

Aside from those two standouts in this boring series, there wasn’t much else that drew me in. Also, it’s always a red flag for me when these series air, and the real family or other people portrayed in it have issues with the accuracy and content. I recommend skipping this overly long, bland depiction of events in favour of the documentary series instead.

The Staircase is available to stream on NowTV in the UK

REVIEW: The Summer I Turned Pretty 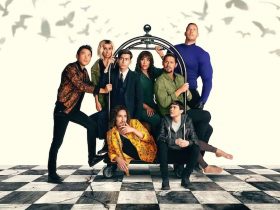